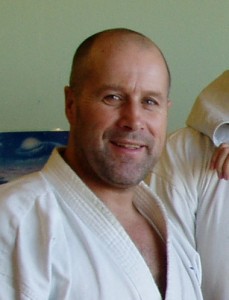 Sei Shihan Kelvin came to karate from a boxing background, starting as a 16 year old with the Bushidokai Karate Club in Carroll St, Dunedin in 1977. In 1980 he joined the newly formed Dunedin Seido Club. Kelvin achieved his shodan (1st dan black belt) rank under the scrutiny of the then Sensei (now both Hanshi) Renzie Hanham (Shibu Christchurch) and Andy Barber (Shibu Nelson). Kelvin attained his 6th dan (Sei Shihan) rank in Christchurch in 2019.

Kelvin has been teaching classes since 1978, initially taking children’s classes but now more involved with senior classes along with sparring and fitness. With a number of personal successes in tournaments, Kelvin provides specialised training for dojo members wishing to compete at tournament level.

For the last 12 years Kelvin has provided self defence instruction as part of the NCEA syllabus for a local girls’ secondary school as well as to frontline staff of organisations, including the Dunedin City Council. A former member of the New Zealand Police, Kelvin trained as an advanced baton instructor and taught police staff: self defence, handcuffing, use of the PR24 (Baton), pepper spray, personal protection and team policing. He was also involved in personal protection duties for overseas dignitaries, ‘rubbing shoulders’ with President Bill Clinton among others.

Sei Shihan Kelvin has trained at Honbu in New York under Kaicho (Grandmaster) Tadashi Nakamura, the founder and chairman of Seido Karate. He has also trained in many other dojos throughout New Zealand. 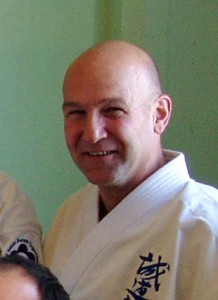 Jun Shihan Kelvin Wilson started training at the aged of 18 with Bushidokai Karate in February 1979. At the start of 1980 he changed styles to the newly formed Seido Karate Dunedin and has been a dedicated member ever since.

While his junior gradings were completed at the Dunedin dojo, Jun Shihan Kelvin has since travelled to Christchurch Shibu for all promotions since senior green belt under Sensei (now Hanshi) Renzie Hanham. The exception was his shodan (1st dan black belt) grading, held at the Dunedin dojo in Anzac Ave in June 1984. Most recently he was promoted to 6th dan (Jun Shihan) rank in Christchurch in April 2011.

Kelvin has always been an active member of the Dunedin Seido club, running the Club’s canteen and managing its library as a yellow belt. He became a committee member while a green belt and subsequently Treasurer and President. While the Club’s senior brown belt he ran the junior class but once graded to black belt started taking senior classes, which he has continued doing ever since. Currently he instructs at Sunday morning classes for black belt kata, kyu grade kata, junior syllabus and a junior general class. He also assists with the black belt class on Monday nights.

Karate training has taken Kelvin to Geelong, Australia for a week of training and participation in Geelong dojo’s first black belt grading. In 1987, he and ten other Dunedin Seido members hired a mini van and toured the country for two weeks, training at most Seido dojos around New Zealand. In 2006 he spent two weeks at Honbu, the World Seido Karate Headquarters in New York, during its 30th anniversary celebrations.

Jun Shihan Kelvin still enjoys training, whether instructing or taking part in a class. He likes to take a balanced class that is both physical and technical, encouraging each person’s individuality, and often refers back to what he learnt as a beginner.